Please, download and examine the final version of the document “Environmental and Social Management Plan” (ESNP) on the reconstruction of the school # 30 for 220 pax in Saroy MCA of Bakhmal district, Jizzakh region. 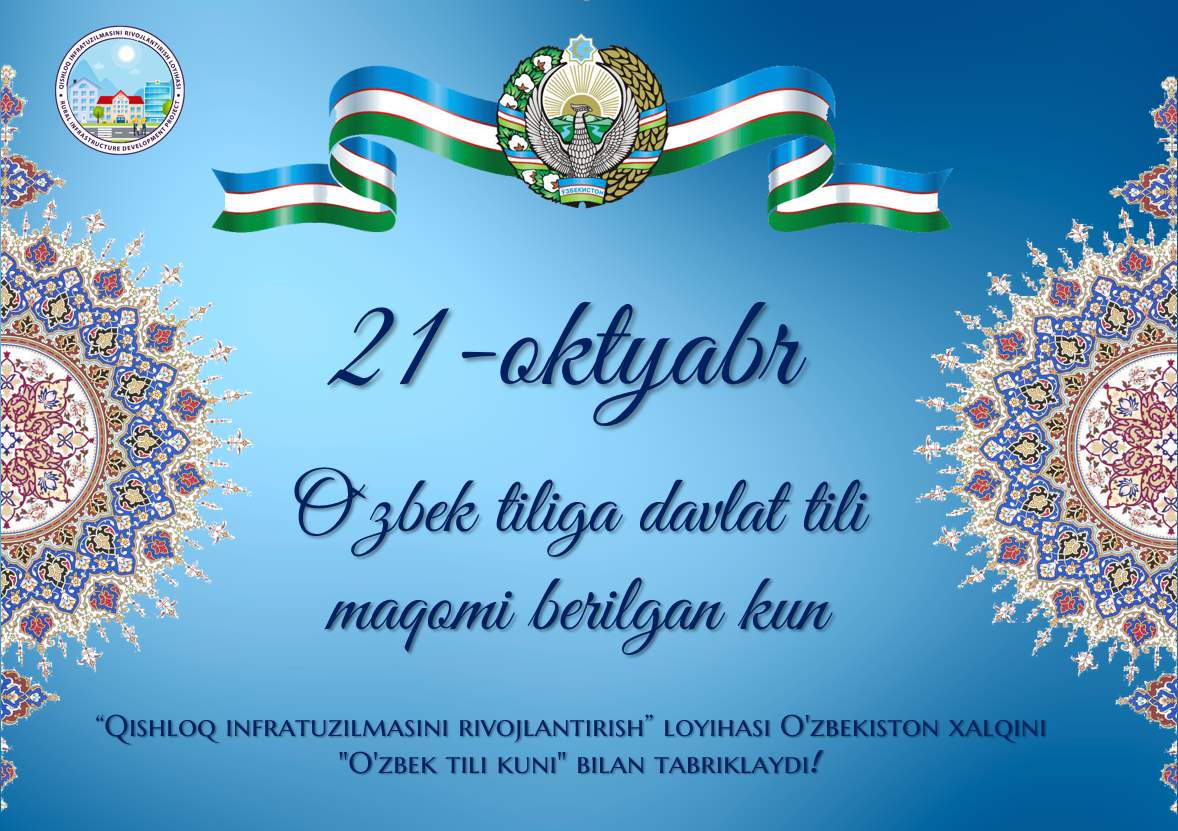 Cogratulations on the "Day of the Uzbek language"!

“Rural Infrastructure Development” Project congratulates the people of Uzbekistan on the "Day of the Uzbek language".

Facts about “Rural Infrastructure Development” Project. For the period of 2020-2024, in addition to financing the Project implementation, 11,700,000 USD has been allocated to Build the capacity of local government, communication and public relations, citizens’ engagement (Component 1 b)
Such as:
1. The works under each contract are being studied and carried out with the involvement of foreign experts within 24 months on the basis of public opinion.
2. Services of foreign and international experts’ group will be provided for the qishloqs that are not provided with clean drinking water during the Project implementation period for 3 years.
3. Continuous training on professional development for representatives of local government and self-government bodies and specialists of other departments involved in the Project, in accordance with the schedules is being conducted during 4 years.

Report about the appeals of individuals and legal entities

The Grievance Redress Mechanism is available for beneficiaries or other interested stakeholders to submit any questions or concerns they may have about project implementation. Questions or concerns may be submitted through the following channels. Download the detailed information here. 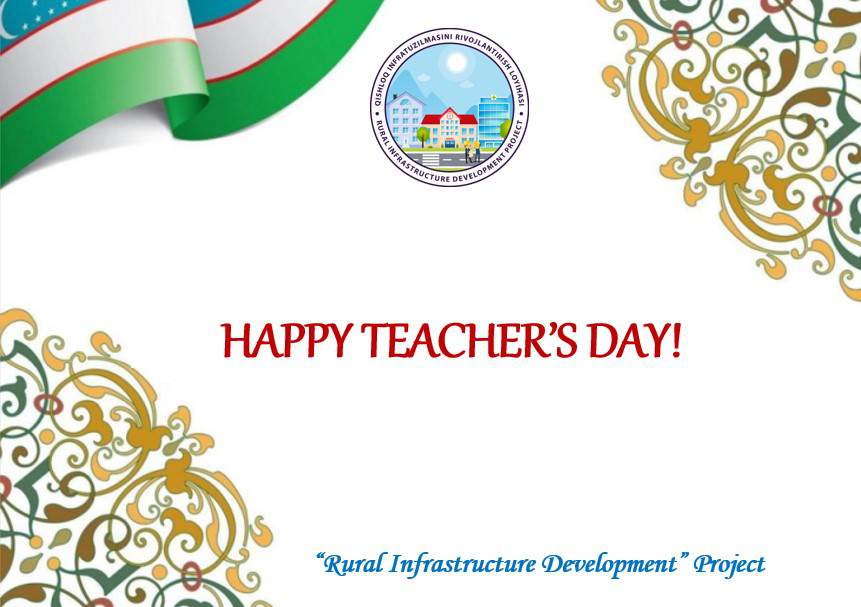 On behalf of the "Rural Infrastructure Development" Project we congratulate you with Teacher's Day!
We wish you success and good luck in your noble and responsible profession, may happiness and prosperity be always with you! 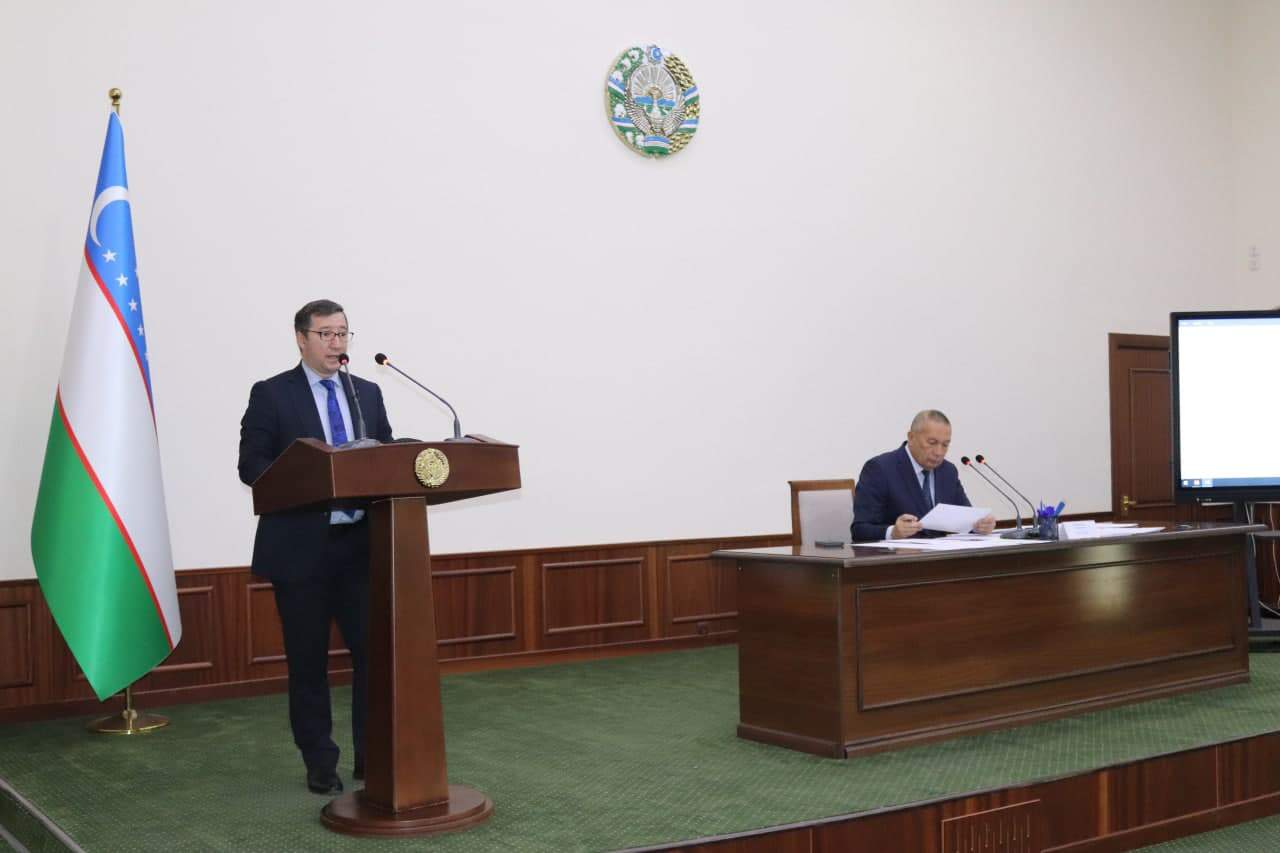 Today, on September 28, an extraordinary session of the Jizzakh regional Kengash of People's Deputies was held under the khokim of the Jizzakh region E. A. Saliev’s direction in the regional khokimiyat. The meeting was attended by people's deputies, districts’ khokims, representatives of ministries and departments, as well as by the deputy director of the "Rural Infrastructure Development" Project Zokir Rakhimov. At the meeting Z. Rakhimov announced a report on the progress of the Project, in particular, he noted, that in 28 MCAs of Bakhmal, Zaamin, Farish and Yangiabad districts of Jizzakh region there were held tenders among the project organizations for the sub-projects selected by the citizens. Also, he informed the participants that today the final determination of the contractor for the reconstruction of a school, designed for 220 academic places in Saroy MCA of Bakhmal district would be held, and in the near future construction works would start. 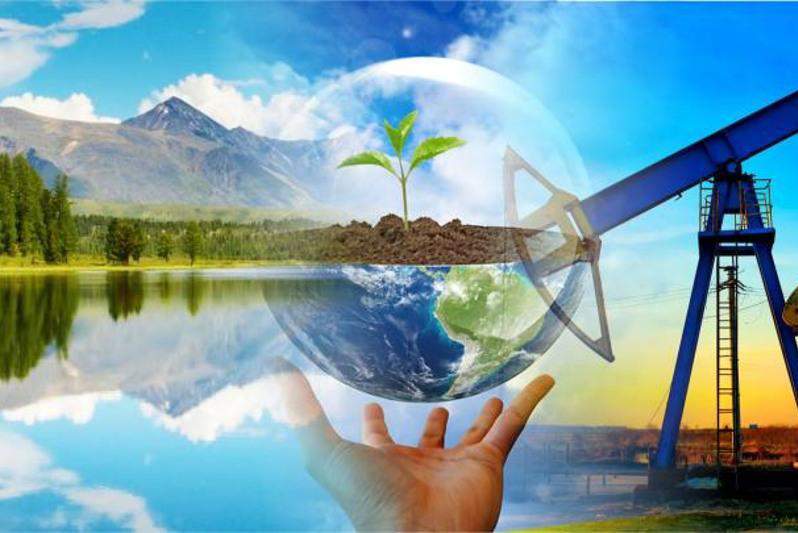 Online workshop on the environmental and social protection

In accordance with the World Bank's Operational Management (4.01 , 4.12), which contributes to the implementation of the Bank's mission of reducing poverty and achieving sustainable development, there was held an online workshop on the environmental and social protection of sub-projects selected in MCAs, within the framework of the “Rural Infrastructure Development " Project for PIU specialists. The workshop was attended by representatives of the World Bank – R. Wrobel, Social Development Specialist, J. B. Collier, Senior Environmental Specialist, R. Tlepova - National Consultant, A. Khamidov, Ecologist, National Consultant, PIU representatives – I. Ruziev, Environmental Protection Specialist, M. Isomitdinova, community mobilization specialist.
The participants discussed the development of documents, as well as accordance of selected projects to procedures and rules, requirements and principles of the Environmental and Social Impact Assessment (ESIA), the Environmental and Social Management Plan (ESMP), the ESM checklist, for analyzing the risks and opportunities of the Project, compliance with World bank and legal requirements.
This workshop was aimed at effective interaction with stakeholders, identification and assessment of environmental and social risks, commitments and opportunities.

You can download and examine the final version of the document “Environmental and Social Management Plan” (ESNP)) on the construction of the school in Sakhil MCA of Pakhtaobod district, Andijan region. 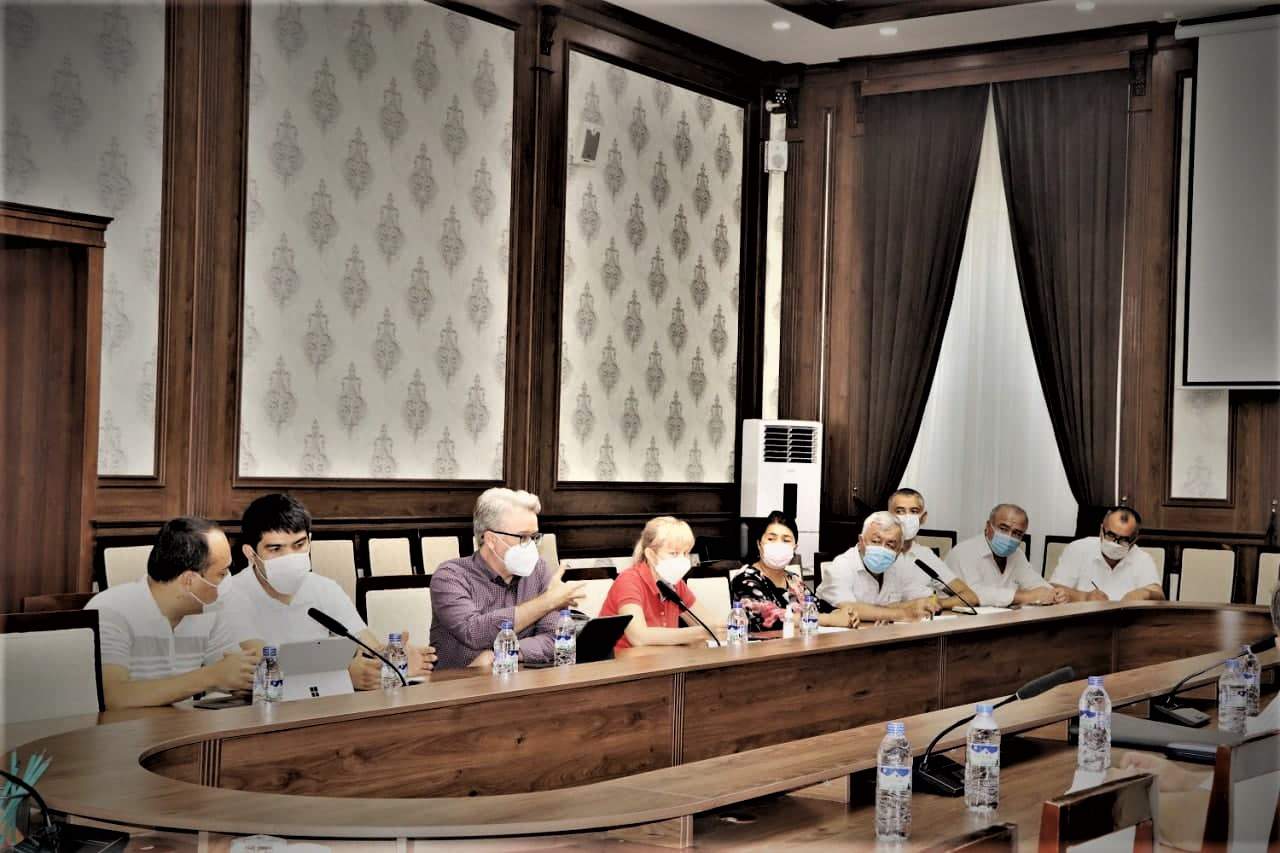 From September 13 to 16 of this year, the head of the Rural Infrastructure Development Project Zafar Urakov, representatives of the World Bank Robert Wrobel and Rano Tlepova made a working trip to the most eastern region of the country, the Ferghana Valley. The participants of the trip visited all the viloyats representing this region.

In Andijan viloyat meetings with the Project Facilitating Partners - the representative of the Agency for Technical Cooperation and Development (ACTED) Ilkhom Gulomjonov and the representative of "Yuksalish" National Movement Shamshod Yunusov were held. At the meeting, they discussed the status of the activities carried out by the Project Partners, outlined ways to improve the implementation of the project, and also planned further steps and prospects for the future.

At the second meeting with the Head of the engineering company "Yagona buyurtmachi hizmati" Sh.Shamsutdinov, Deputy Head of the consulting center M. Topivoldiev, Deputy Head of Construction Department of the Ministry of Economic Development and Poverty Reduction for Andijan viloyat Nizomitdin Rakhmonov, representatives of the Secretariat for Integrated Development of Territories, Communications, Construction, and Housing and Communal Services Alisher Abdullayev and Dilhurozh Yulchiev they discussed Standard tender documentation, developed and improved by the World Bank and the Government of the Republic of Uzbekistan regarding engineering companies, a list of engineering organizations and construction companies that have a top rating and the capabilities of engineering companies regarding the environmental and social management plan.

In " Tosh Yuli” MCA of Markhamat district they met with representatives of Makhalla Development Unit, partner facilitators, engineers, representatives of the Project Implementation Unit and Qishloq Khokimiyat. They discussed a presentation made by the qishloq facilitator and engineers on the analysis of the health state, level of education and well-being of the village population that was carried out under the control of Makhalla Development Unit.

In Ferghana they met with representatives of the Agency for Technical Cooperation and Development (ACTED), "Yuksalish" National Movement, “Tarakkiyot” Population Development Support Centre and the Adviser to the Minister of Housing and Communal Services on the provision of drinking water to rural settlements of the Republic of Uzbekistan Olivier Norman. Special attention was paid on the creation of a working group for the development of Autonomous Water Supply and Sanitation Systems and attraction of specialists from organizations with the relevant competency and experience to participate in the implementation of this subproject.

In the building of Single Customer Services Engineering Company (SCS) in Ferghana viloyat the meeting with he representatives of Ferghana viloyat Khokimiyat, representatives of SCS, “Tarakkiyot” Population Development Support Centre, Ferghana viloyat project coordinators and specialists in environmental and social protection was held. The main subjects of discussion were the Environmental and Social Management Plan, the issues on the bidding documents. They came to the following conclusion: the specialists of the Project Implementation Unit in viloyats will assist project organizations in developing an Environmental and Social Management Plan, assist at the documentation features work and an improved version of sample tender documents will be provided to the project organizations.

In Korasaroy MCA of Yozyovon district in Ferghana region they continued with the meeting with representatives of Agency for Technical Cooperation and Development (ACTED), "Yuksalish" National Movement, “Tarakkiyot” Population Development Support Centre and the Adviser to the Minister of Housing and Communal Services on the provision of drinking water to rural settlements of the Republic of Uzbekistan Olivier Norman to witness a meeting organized by qishloq facilitators for the representatives of the temporary Makhalla Development Unit on the issue of drawing up the Makhalla Development Plan based on the results of community mobilization activities.

In Namangan viloyat they started a trip with visiting a school No. 22 of the Uychi district in Namangan region, where they studied examples of the construction of eco-toilets. A special feature of the mechanism of these toilets is the method of biological three-stage water purification, making it suitable for discharge into the general sewerage system in terms of quality. The management of PIU considers to use this experience in order to apply it in the facilities of the “Rural Infrastructure Development” Project for schools and kindergartens selected by the citizens.

Later a meeting with representatives of Center for Entrepreneurship and Executive Development, CEED (Bulgaria), the consulting company “Rhytm Plus” (Uzbekistan) and employees of Namangan office of the Project Implementation Unit was held .
The parties discussed the activities of Rhytm Plus company related to five MCAs - Quriq, Qoramurt, Yangi Bogiston, Soz-Soy, Chombogish of Namangan region. They also agreed on the following: due to the fact that sub-projects on autonomous water supply and sewerage systems will be implemented within the framework of the Rural Infrastructure Development Project, PIU is creating a working group for the development of the concept and mechanism of autonomous water supply systems, where specialists from PIU, the World Bank, ACTED and CEED will take part.

In Soz-Soy MCA of Chartak district, Namangan region they met with members of Makhalla Development Unit and listened to the existing problems of the citizens. The main objects that require special attention, according to the residents’ opinion, are the lack of drinking water and wireless Internet. The reason for the priority problem of drinking water is underground water, which is used as a source of water supply for the region population, for the needs of industry and irrigation of land. The shortage of drinking-quality water is due to the insufficient use of industrial desalination plants, as well as the period of wear and untimely reconstruction and replacement of water supply and sewerage networks. As a result of a meeting, it was decided carry out calculations by qishloq engineers on financing water supply and sewerage systems.

The final meeting of the working visits of RIDP management and representatives of the World Bank with the head of the forestry named after Abu Ali Ibn Sino Kh. Abdusattorov was held in Chodak village of Pap district, Namangan region. The visit was limited to fact-finding within the framework of the new Project "Sustainable Development of Forest Territories" to study the prospects and economic opportunities for improving the standard of living of the population of Uzbekistan since the strategy of sustainable development of society is largely determined by the ecological and resource components. This project is in the process of developing by the World Bank.

At the end of the meetings they agreed on close cooperation for the implementation of the planned tasks and exchanged the recommendations to eliminate shortcomings in the work process.